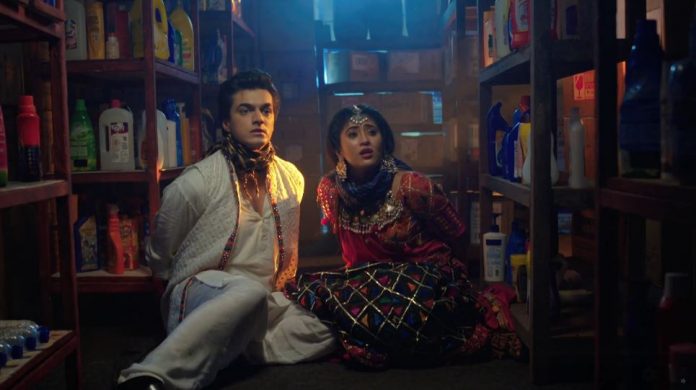 Yeh Rishta StarPlus Kaira Kidnapped Drugged United Kartik and Naira spend cute moments, while Vedika tries to alert them of the approaching danger. Kairav and Vansh enjoy the Dandiya event to the fullest. Vedika and Pallavi try to get rid of the lady and rush to the family. Naira wants Kairav to come home with her. Kairav refuses to her and asks her to dance for his sake. Naira keeps his heart and dances in a traditional avatar. Kartik gets mesmerized seeing her. The world stops for Kartik and Naira. Vedika gets jealous seeing them. She doesn’t want to lose Kartik. She thinks if she should help Naira or not. She thinks Naira will be dying if she doesn’t save her.

She wants to save Naira after getting rid of her inner conflicts. Naira gets in more risk. Vedika thinks she won’t be putting Naira in risk, after knowing the consequences. She decides to alert Kartik about Naira. Vedika alerts him in time. Kartik rescues Naira in time. They come closer, which upsets Vedika. Vedika feels she has no place in his life. Kartik reprimands the organizers for the poor arrangements. Kartik tells that he won’t spare anyone if his love Naira falls in trouble. He is happy that she is safe. He rushes to talk to Naira.

On the other hand, Damini thinks if Kartik’s case is weak and would get defeat for her. She doesn’t want to lose the case that stains her career. She wants to win the custody case for Kartik. She asks her aide to spy on Naira and hunt for her past, which would have something that benefits her in the case. She tells him that she has to win the case some how. She knows that Naira’s past would change the case completely. The aide tells her that he is at the same place as Kartik and Naira.

He thinks to keep an eye and also rush to Naira’s house to collect more evidences. Vedika hugs Naira out of concern and is relieved to see her fine. She feels Naira is Kairav’s mother and very important for him. She wants Naira to be fine. She doesn’t want to snatch Naira’s rights. The family enjoys the Dandiya event. They have got together just for Kairav’s sake. Kairav wants to know about his parents. Kartik checks on Naira about her welfare. He offers to drop her home. Naira gets attacked by some kidnappers. When Kartik intervenes, he also gets kidnapped. The kidnappers want to demand ransom from their rich families.

They mislead their families by sending text. Vedika cries in guilt. She wants Kartik, Naira and Kairav to be fine. Naksh tries hard to find Naira. He doesn’t see Kartik and assumes that he had gone to drop Naira home. Kartik tries hard to save Naira, but in vain. They get to the kidnappers’ hideout. Meanwhile, Damini sends her aide to Singhania house to get documents and pictures related to Naira’s stay in Goa. She wants the evidences to use against Naira in the court. Naksh tells the family that they should go home. Kairav doesn’t want to go there so soon. Naksh agrees to stay back for his sake.

Kartik and Naira learn about the kidnappers, greedy for the ransom. They get drugged and turn into a light mood. They fight, while the kidnappers plan the ransom amount and mode of contact with their families. Kartik and Naira tend to get closer. Their fight turns into love because of their drugged state. They apologize to each other and also express love. Damini wants to defame Naira in the court to snatch Kairav from her.