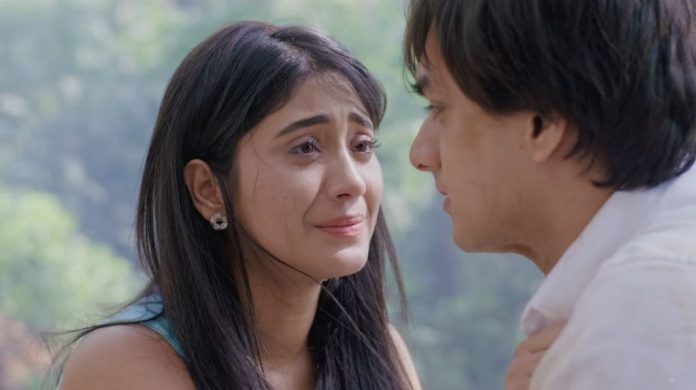 Yeh Rishta Upcoming Starplus Kaira Romance time Kartik and Naira desperately search for Kairav. Vedika knows Akshat’s criminal mind. She knows that he will be misleading Kartik and Naira. She knows Akshat won’t be releasing Kairav after taking the ransom. Kartik follows the signs left by Akshat to reach Kairav. Akshat gets evil to attempt to kill a little boy. He throws down Kairav to let him die, while he gets sighted by Vedika. Vedika can’t believe that Kairav fell in such a grave danger. She waits until Akshat leaves and runs to save little Kairav. Vedika finds Kairav’s ropes stuck.

She asks him not to get scared and be brave. She tries to save him. She shows much courage. She risks her life to save Kartik’s son. She tells Kairav that they will soon get rescued by Kartik and Naira. She hugs Kairav and encourages him. Naira finds them in danger. She shouts to get heard by everyone. Akshat realizes that Vedika has saved Kairav. He wants to stop Vedika to fulfill his revenge. He returns to the place to teach a lesson to Vedika. Kartik and Naira reach Kairav. They rescue Vedika and Kairav. They are glad that Vedika saved their son’s life.

They thank Vedika for her big favor. Kairav asks Kartik not to spare Akshat. Kartik finds Akshat and runs to bash him up. Vedika tells Naira that Akshat is dangerous and may hurt Kartik. Naira tells Kartik that both of his parents are brave and will handle Akshat well. She sends Kairav home with Samarth. Vedika tells Naksh that she had saved Kairav, but wants to save Kartik and Naira from Akshat. Naksh accompanies her to find them. Kartik and Akshat have a fight. Akshat tricks Kartik by blinding him.

He beats up Kartik. Naira loses her cool on seeing this. He vents anger and beats up Akshat to punish him for hurting Kairav and Kartik. She runs to save Kartik from getting wounded. Akshat finds a chance to run away. Kartik falls unconscious. Naira revives him with love. Dadi is glad that Samarth brought Kairav home. She prays for Kartik, Vedika and Naira as well. Naira tells Kartik that she got too scared with the thought of losing him. Kartik didn’t wish her to invite troubles. She tells him that she can never leave him in trouble. She confesses love to Kartik. She tells him that she loves him as much as he loves her.

She accepts his love proposal. Kartik can’t believe that she is reciprocating his feelings. He gets delighted. They rejoice their union in a romantic love confession moment. This shocks Vedika the most. Naksh asks the police to find Akshat. Vedika shows her rights on Kartik as his wife. Kartik gives the credit to Naira for saving him. Kartik and Naira feel bad when they realize Vedika’s claim. Kartik doesn’t limit his feelings. He romances Naira. Vedika learns Kartik’s wish to marry Naira. What will Vedika do now? Keep reading.