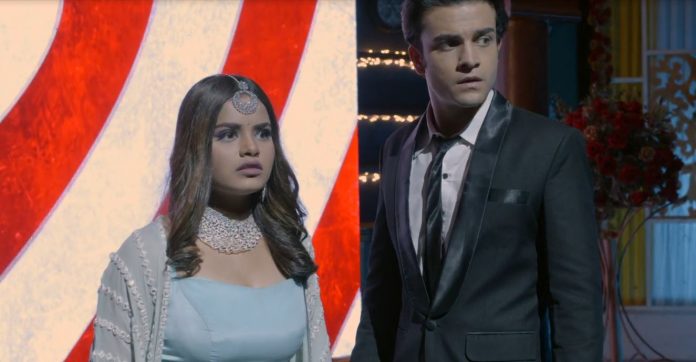 Kumkum Ranbir terrible engagement Prachi stunned Ranbir questions Maya about his enemy. He threatens of breaking her engagement. Maya tells him that her family won’t listen to him. He tells that he has a proof of their last meeting, he will show the pictures and prove her wrong. She asks him to get out. He threatens her and gives her a last chance to speak up the truth. Rhea meets Abhi and Meera at home. Abhi asks Rhea about his gifted necklace. Rhea has given it to Maya. Abhi asks her about Maya. Meera wants Abhi to give a chance to Rhea to explain. Abhi asks Rhea to tell if she is Maya’s friend.

Rhea tells that Maya isn’t her friend. Abhi doesn’t think Rhea is saying the truth. He questions her about the necklace. Rhea tells that maybe Maya got the same necklace. She cleanly lies that she has kept the necklace in the bank locker and will get it tomorrow. Maya plans a surprise for Mohit. The staff fixes the big screen to show Maya’s love confession for Mohit. The staff doesn’t know that she is with Ranbir. Ranbir tells Maya that he will make a fake confession and blame her. He tells that he will expose her in the party. Maya tells that she won’t accept defeat. Ranbir and Maya’s conversation gets recorded and plays on the big screens.

Prachi and Pragya are much shocked, when Ranbir shares his weird plan that he will admit love for Maya to break her engagement. Maya and Mohit’s parents are shocked. Pragya wants to know why is Ranbir confessing love to Maya. Ranbir proposes Maya deliberately to make her tensed. Prachi tells Pragya that it was Ranbir’s plan to make Maya admit her crime, he isn’t aware of Maya’s surprise for Mohit. Pragya wants to stop Ranbir before he falls in much trouble. Ranbir asks Maya to break the marriage and marry him, since he loves her. Maya’s surprise gets ruined. Ranbir realizes that everyone has heard his love confession.

Mohit shouts on Ranbir for stealing his love. Prachi wants to scold Ranbir for his stupid move. Mohit cries that he lost his first love. Aryan and Shahana want to help Prachi and Ranbir. Mohit’s family break the alliance and leave. Maya scolds Ranbir for breaking her engagement. Ranbir wants a chance to explain that it was all fake. Maya blames him for ruining her life. Chobey wants to accept Ranbir as his son-in-law. He tells that he can accept his love for Maya. Pragya tells that Ranbir doesn’t want to marry Maya. Chobey thinks he really wants to marry Maya so he has created this drama. Maya doesn’t want to marry him.

Chobey doesn’t want to listen to anyone. He announces Maya and Ranbir’s engagement. Prachi yells at Ranbir for losing the last chance to prove his innocence. She tells that he is so stupid and landed himself in trouble. Ranbir tells her that he was just trying to outsmart Maya. She asks him if they took the huge risk to get this result. She asks if he will get engaged to Maya. Ranbir asks her not to worry, engagement doesn’t get fix this way. She panics that he will marry Maya. He tells that his parents will meet Maya and reject her. He assures that he won’t marry Maya.

Pragya finds Prachi frustrated. She knows Prachi also loves Ranbir. Prachi tells that Ranbir is such a big fool. Pragya asks her to support Ranbir. Prachi doesn’t want to help him now. Pragya wants to unite them. Ranbir tries to get help from Prachi and family. Pragya assures to help him.

Both these Bhagyas, Kumkum and Kundali, are examples to show that in this Kalyug evil always wins. God also saves and covers the wrong-doer, the criminal. None of the villains and vampires are exposed. Lies, conspiracy and hurting others are going on and on and on. It’s never ending. Hit and miss of Abhi and Pragya is getting bored. The two serials should now end happily.