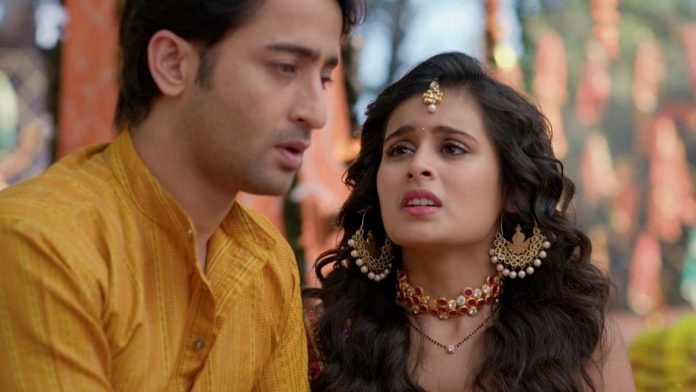 Kuhu Kunal Mishti Abir huge fight in Rishtey Pyaar Ke Meenakshi master plan against Mishti and Kuhu begins. She wants both the sisters to have a big fight and ruin their family values, so that she can taunt Maheshwaris about them. Doctor tells Mishti that Abir looks drugged, maybe he had consumed spiked food. Mishti doesn’t think that anyone can spike the food in the family. She tells that Abir isn’t on any medication. Doctor takes Abir’s blood sample to send for tests. Mishti asks him to treat Abir so that he gets back to consciousness.

She wants to take Abir to the temple so that he can perform the puja. Abir gets injected with the medicines. He gains consciousness, still he stumbles and isn’t in his total senses. Meenakshi thinks her plan will succeed, she will make the sisters fight so that she can oust both of them from the family. She knows whatever happens, Mishti and Kuhu will end up blaming each other. Kuhu decorates the Shivling with the flowers.

She calls Kunal and asks him to help her in decorating the floral umbrella. Kunal tells her that he has come home to meet Abir. He tells that he will come to the temple soon. Jugnu lies to Kunal about Abir and sends him away.

Jugnu hides the doctor for time being. Mishti takes Abir to the temple. Abir gets romantic with Mishti. They have cute moments while they get rush to the temple to make it on time. Jasmeet spoils the fun by spreading poisonous talks about Mishti. Meenakshi has to act supportive of Mishti. She defends Mishti and impresses Rajshri. Jasmeet doesn’t want to get scolded by anyone. She maintains her same opinion about Mishti. She spreads fake news about Mishti to make her fall in Meenakshi’s eyes.

She tells that Mishti is independent and maybe she drinks alcohol. Rajshri doesn’t agree with him. She knows Mishti’s values. Meenakshi defends Abir’s name. Everyone waits for Abir a lot. They think Kunal can perform the puja. Meenakshi tells that Abir is her son and will do the puja. Everyone feels bad that Kunal doesn’t have any importance in Rajvansh family. Maheshwaris think if Kunal has no value, then even Kuhu won’t have any value. Nanu convinces Meenakshi to let Kunal perform the puja. She agrees, but makes up her mind against her Bahus.

She doesn’t want to forgive them, who are responsible for Abir’s absence. Mishti and Abir meet the family. Mishti covers up Abir’s drugged state and takes the blame on herself. Pandit asks them not to come ahead to perform the puja if she had taken alcohol. Mishti isn’t sure of Abir’s intoxication. She makes excuses and stops Abir from revealing anything. Kunal and Kuhu get a chance to perform the puja.

Meenakshi tolerates it angrily. She doesn’t like it, knowing the puja meant a lot to Abir. Mishti wants to know out who is responsible for Abir’s state. She asks doctor to send the reports to her. Mishti and Abir serve the poor people and feed them. They are satisfied after doing a good deed. Meenakshi wants Mishti and Kuhu to have a big fight publicly and ruin the family’s name. She doesn’t want her plan to fail. She tricks Mishti and Kuhu to make them against. She gives a hint to Mishti that Kuhu is responsible for spiking the coffee. Mishti wants Kuhu to answer her.

Mishti is upset that Kuhu snatched Abir’s dream of performing Shivratri puja. Mishti confronts Kuhu after Abir faints down. Kunal gets angry on knowing Kuhu’s mistake. Mishti exposes Kuhu’s truth of jealousy. Kuhu blames Mishti for being the root of all the problems. They end up having a cat fight. Meenakshi gets the golden chance to taunt on the sisters’ spoilt bond. Kuhu feels her status is just of a helper’s Bahu. She wants Meenakshi to be her mother-in-law, not Parul. Meenakshi shows her true colours. She threatens to oust both the Bahus from her house, since they have become a reason of sorrow and troubles for Rajvansh family. Maheshwaris get afraid on hearing Meenakshi’s ultimatum.