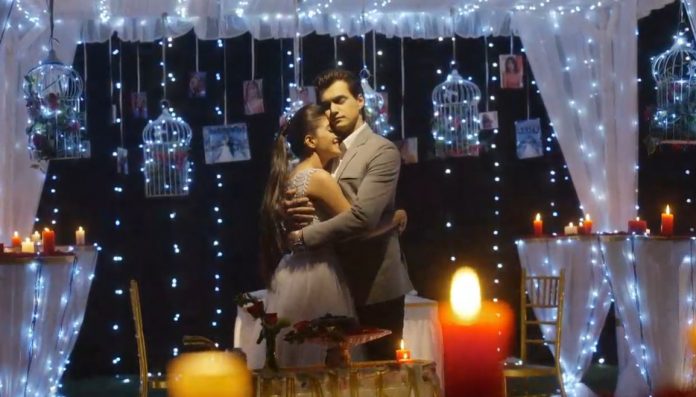 Yeh Rishta Nayi Shuruvaat Kartik Naira soulful love Kartik and Naira’s roller-coaster type of life journey, since they are destined to be together and yet face a lots of ups and downs. Kartik arranges a dinner date for Naira and awaits her.

He hopes that everything is fine and as per Naira’s taste. Kartik doesn’t make the preparations for any special occasion. He wants to treat every day as a special occasion, since Naira is the heroine of his life, whose entry will always be special. He recalls meeting Naira in Rishikesh. Her identity was of Tina. Naira helps some foreigners in Rishikesh.

She gets paid generously for her help to return the passports. She wants to help the people of her ashram. Back in present, Naira makes it to the date, and stuns Kartik with her looks. He tells her that he is ready to wait for her all his life. She apologizes for making him wait. She tells him that she won’t wait for anything. She gets in hurry. She reveals that Kartik isn’t as heroic always. She recalls the time when she thought to save Kartik from drowning in the river, but he heroically saved someone else from drowning.

Kartik becomes a hero for the group. Naira tells them that Kartik didn’t jump to save anyone, he had fallen by mistake and then acted like a hero. She gets into an argument with him after spoiling his image. He asks her who is she to get so mean. She tells him that tiver rafting isn’t his cup of tea. She calls him a frog and makes fun of him. Kartik likes her bold behavior. He wants to befriend her. Kartik and Naira meet once again and get into a harsh argument. He doesn’t want her to count his mistakes, rather than his own.

Kartik gets to meet Akshara for work. He asks Akshara about her daughter. He then meets little Mishti and turns into her BFF. He bonds with Akshara, after starting to work with Naitik and Gayu. Everyone likes Kartik, except Naira. Kartik learns that Naira is Akshara’s daughter. He tells Akshara that he knows Naira as Tina. Mishti and Gayu support Kartik. Kartik and Naira realize that there is no one like them. Naira learns that Kartik works in Naitik’s office. She wants to get Kartik fired soon.

Reviewed Rating for this particular episode Yeh Rishta Nayi Shuruvaat Kartik Naira soulful love: 4/5
This rating is solely based on the opinion of the writer. You may post your take on the show in the comment section below.