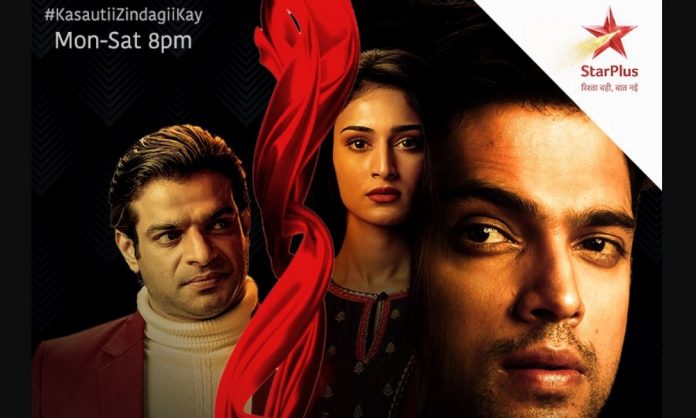 Kasautii Latest Upcoming Love drama by Bajaj Prerna Mohini wants to support her daughter Nicedita in her goal of marrying Mr. Bajaj. Komolika tries to stop Nivedita. She tells them that Bajaj is a totally different man, he is unlike other men who can get trapped by pretty women. She tells that Bajaj is mad for Prerna and he loves her a lot, he will never look at Nivedita even if she tries hard to charm him. She asks Nivedita not to waste her time after him.

Nivedita thinks its the same thing that Komolika always discourages her so that she can insult her again and again. Mohini thinks Nivedita is right, she should try to win Mr. Bajaj’s attention once. On the other hand, Kaushik teases Kuki by pleasing Anushka in front of her. He proposes Anushka with much love. He also dances with Anushka. His closeness with Anushka turns Kuki jealous and angry. Kuki doesn’t understand why he is doing this.

Kaushik wants to teach her a lesson and leave her fuming by befriending Anushka. He isn’t interested in Anushka too. Anushka gets on cloud nine when he praises her to be an extraordinary girl. She also admires Kaushik. Prerna finds Shivani hiding some tension again. She tells Shivani that she is there to help her out. Shivani doesn’t confide anything. Prerna gets worried for her sister. She misses their old bonding.

Meanwhile, Komolika and Prerna get into an argument. Komolika tells her that Anurag isn’t coming. Prerna wants him to come and see the way she is going to ruin him. She introduces her plan of Bajaj city. Komolika is left shocked to see her hardwork. Nivedita tells Mohini that Prerna is working smartly to impress Bajaj. Mohini wants her to take Prerna’s place with more smartness and charm. She is sure that if Prerna can win his heart, then even Nivedita can win his heart. Mohini tells her that Prerna is nothing in front of her.

Nivedita thinks to meet Bajaj when Prerna is away. Komolika watches Bajaj and Prerna’s celebrations as they cut the cake together. She spies on them. She finds their relation weak. She suspects that they aren’t husband and wife. She informs Mohini about her finding. She thinks Nivedita stands a chance. She tells that she will also support her if needed. Mr. Bajaj gets to overhear their talks.

He gets alert that Komolika is doubting his relation with Prerna. He goes closer to Prerna to end the doubts arising in Komolika’s mind. Mohini feels every marriage isn’t perfect, Bajaj will soon accept Nivedita. Bajaj shows his love for Prerna. They pretend to be happy together to show off in the party. He tells Prerna about Komolika doubting them. Prerna also plays along to turn Komolika jealous.

Reviewed Rating for this particular episode Kasautii Latest Upcoming Love drama by Bajaj Prerna 22nd July 2020: 4/5
This rating is solely based on the opinion of the writer. You may post your take on the show in the comment section below.