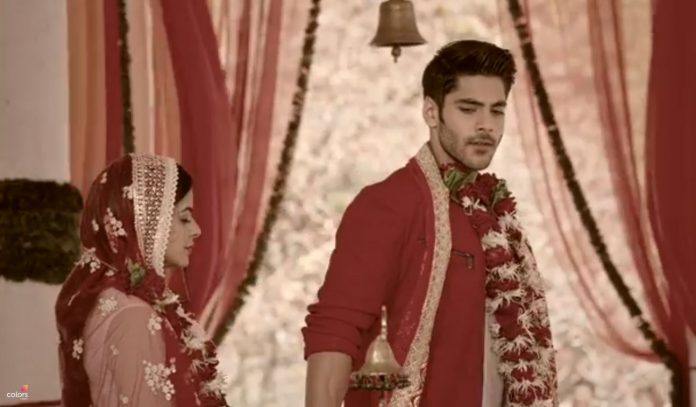 Shakti Colors TV 24th July 2020 Heer condemns Soumya Virat insults Heer and Soham. He clears that he can’t accept her with the truth, he can never love her. Soham controls his anger. Virat proves that he has taken revenge on them. Virat asks them to leave. Heer tells Virat that she fell in love with him, but he is ending everything. She requests him not to do this. She asks him not to break her heart. Virat gets angry on her. He tells that Harman and Soumya’s love story is a stain on the society. He tells that her dad Harman was a mad person to fall in love with Soumya.

Heer warns him not to say anything against Soumya. She tells him that he has no right to speak against Soumya. Heer and Soham scold Virat. Virat asks them to go to her family and ask the truth. Parmeet tells about the Shuddikaran puja, since she was related to a kinner, Preeto knew this truth. Soham tells them that he will raise a hand on Virat. Virat asks them to ask anyone in their village, everyone knows Soumya’s truth. Heer breaks down. She recalls her Gulabo. She understands that Preeto had distanced Soumya for this reason.

Virat tells that he hates kinners a lot, he doesn’t want to have any relation with kinners and their associated people, Heer was raised by Gulabo, she is a fool to worship Soumya. Sant and Parmeet get glad. Virat asks Heer to leave. Heer runs out of his house. Soham follows her, being afraid that she may take some wrong move. Parmeet tells Sant that Virat is hiding something from them. On the other hand, Preeto wishes that Heer comes home and starts her new life. Heer returns home and asks them the truth, if Soumya was really a kinner.

Preeto thinks Virat had told the secret of Soumya’s identity, not Heer. Harak asks her to forget everything and take some rest. Soham asks him to answer the truth. Harak and Preeto tell Heer that Soumya was a kinner. Heer and Soham get a huge shock. Heer recalls Soumya and her moments. She feels Soumya has cheated her by hiding the truth. Soham asks them why did they hide the truth from them. Preeto tells that the truth didn’t matter to them, Soumya had risked her life to save them, the truth shouldn’t change their feelings for Soumya.

She praises Soumya for keeping duties of a mother and Bahu. Heer tells Preeto that Soumya’s truth has ruined her life, this is the reason that the truth matters to her. She feels her dream of marrying Virat broke because of Soumya. Heer tells her that she feels strange that Soumya was a kinner. Rohan tells her that Soumya’s identity can’t end her sacrifices and good values. Heer tells that Soumya has snatched her love, Virat. She asks Preeto why did Soumya love Harman and entered their house.

She also shows her hatred for Soumya, since she had ruined Harman’s life. She is much astonished by the truth. She tells them that Virat was right to hate her. Nutan tells her that the truth is still hidden. Heer tells her that she has known enough of the truth and can’t bear anything more. Rohan asks her to calm down. Soham tells Rohan that Soumya’s truth won’t change if they calm down. Heer asks Preeto why did Soumya’s family get her married to Harman, how did they ruin Harman’s life. Preeto thinks Heer can never tolerate her truth.

Heer vents anger on Soumya. Raavi and Rohan know Heer’s truth. They ask Heer to stop blaming Soumya. Heer accuses Soumya for snatching her happiness and love. She tells them that they all have ruined her life by hiding the truth till now. She tells them that she won’t live with them. She runs out of the house, while crying for Virat. The family asks Heer to stop and not turn away. Heer tells that she will give her life and prove herself right.

Reviewed Rating for this particular episode Shakti Colors TV 24th July 2020 Heer condemns Soumya: 4/5
This rating is solely based on the opinion of the writer. You may post your take on the show in the comment section below.