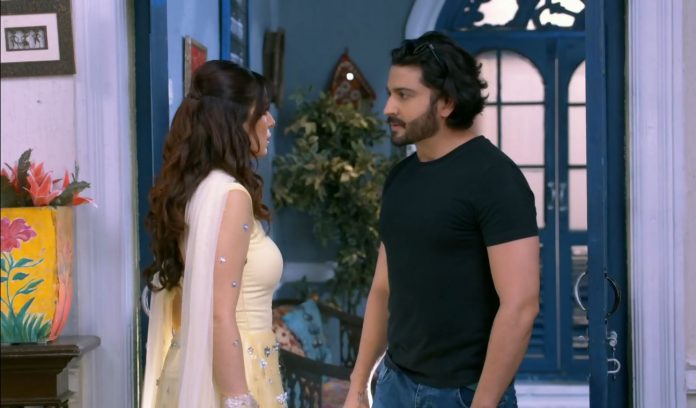 Kundali Bhagya 27th July Karan Preeta unexpected meet Shrishti gets upset that everyone blames her for the wrong happening around. She doesn’t want to become a punching bag for them. She gets saved from Preeta’s anger. She finds Preeta upset and asks her to divert her mind. Preeta tells her that she isn’t missing Karan. Shrishti asks her not to think much of him. She knows Preeta well. Preeta denies it.

Sarla hears Preeta speaking of her hatred for Karan. She doesn’t want to see Karan again. She tells Shrishti that Karan has a bad heart and a bad soul. Sarla is glad that Preeta understood that Karan is really bad. She wants Preeta to forget Karan. She just wants her mum’s happiness. Sarla tells her that she will get some grocery from the market. Preeta hides her feelings. She doesn’t want to think of Karan.

She gets angry on herself. Shrishti tells Janki that Preeta is pretending to be normal. Janki knows Preeta’s pain. She wants Karan to get married to Mahira, else he will always be affecting Preeta. She wants Preeta to stay happy. Shrishti gets hopeful that everything will get fine once Karan realizes Preeta’s worth in his life. She hopes that he comes to take Preeta by siding his ego. She makes a wish that he comes home. Karan arrives there and shouts to call Preeta out.

Shrishti feels her wish has come true. She can’t believe that Karan has come to take Preeta. Preeta hears him shouting and meets him. Preeta gets their memories flashing in her mind. Karan asks her to come along to his home. Shrishti feels happy. Preeta asks the reason for his coming. Karan tells Preeta that he is going to marry Mahira, he wants her to see his marriage happening. He puts her in a big dilemma. Preeta doesn’t want to attend his marriage.

Karan tells her that he really wants her presence, he wants his misunderstandings to get cleared. He tells that he isn’t scared of losing her, their relation will end forever. Preeta calls him wrong. He gets blunt and hurts her again. Janki tells him that he can’t forcibly take Preeta to his house.

Karan asks if they are hiding something that they are scared to come. He gives them the invite for his marriage. He tells Preeta that he will want her at his home soon. He makes a leave, while Preeta sinks in tears once again. Shrishti feels bad for her. Sarla is also gloomy about Preeta’s life.

She doesn’t want Preeta to get upset. She wants to spend the day with Preeta and cheer her up. A thief steals her purse. Sarla tries to get help. Karan happens to see Sarla in trouble. He rushes after the thief. Shrishti asks Preeta to let her in. Preeta doesn’t listen. Shrishti breaks into the room and finds Preeta in tears. She asks Preeta to speak out her emotions. Janki tells Preeta that she was too worried for her life.

Preeta tells them that she isn’t a weak person to take a wrong step to hurt them. She knows that everyone loves her, she can’t be selfish to end her life because of Karan. She doesn’t want anyone to cry for her. She acts normal once again. She waits for Sarla’s return home. She feels Sarla got too late. She asks them not to tell anything to Dadi.

Reviewed Rating for this particular episode Kundali Bhagya 27th July Karan Preeta unexpected meet: 4/5
This rating is solely based on the opinion of the writer. You may post your take on the show in the comment section below.