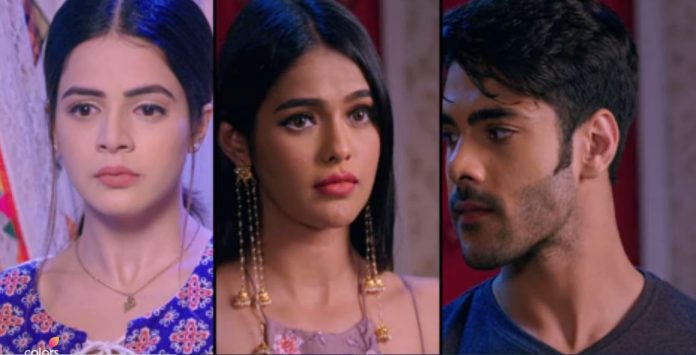 Shakti 30th July Jharna returns in Virat’s life The college mates congratulate Heer and Virat for the marriage. Heer tells them that Virat didn’t come to marry her after making many vows. Virat tells that he doesn’t want to marry Heer ever. Heer tells that she will never keep any relation with him. Teacher asks Virat why did he break Heer’s heart. Virat asks her not to judge him, when she doesn’t know the truth.

She reminds him that he fell in love with Heer and proposed her, why did he leave her on the marriage day. He doesn’t tell the truth. She pities him that he has made fun of love and marriage. She scolds him for spoiling a girl’s life. He gets criticized by many. He doesn’t want to bear the punishment that Heer is a kinner. He hurts himself in anger. Rohan stops him and makes a request, asking him to conceal Heer’s truth. He cares for Virat’s wound. Virat asks if he knows Heer’s truth.

Rohan tells that Heer and Soham don’t know the truth. Virat asks him to make a good story and take the blame on himself for breaking the marriage. He wants his image to get clear. He wishes Virat was in Heer’s fate. Virat goes away. Heer and Soham find Rohan alone. Rohan gets relieved that they didn’t see him with Virat. Rohan finds a couple fighting on the road. He gets to see Heer and his situation.

He finds the men criticizing the kinner for falling in love with a guy. The kinner tells them that the guy proposed her first. The men gets against the guy who made fun of the kinner’s emotions on knowing her truth. They tell that the guy is at fault for not the difference between a girl and a kinner. The guy begs them to leave him, since he didn’t know the kinner’s truth. The men punish the guy and blacken his face. Virat gets worried on seeing the guy’s condition. He feels its his mistake that he didn’t know Heer’s truth. He doesn’t want his family to bear the punishment.

Preeto explains the situation to Virat by making the group of people play the drama on the road in front of Virat. She pays money to the people. She tells Saaya that the drama was necessary to scare Virat, now he will think he was at fault and not reveal Heer’s truth. Saaya is also done seeing the wrong love story. Heer misses Virat and thinks how could he change so much. Virat wants to forget her soon. Preeto and Harak praise Heer for being so determined and studious. They want Heer to make them proud.

Shanno meets Heer to mislead her again. She tells that she can’t focus if her heart is still missing Virat. She weakens Heer. Heer and Virat shut the memories. Heer doesn’t want Virat to meet her again. Virat meets Jharna. He asks how did she come suddenly. Jharna tells that she learnt about his marriage breaking and came to see him. She tells that he doesn’t love her, but they can be friends. He thanks her for visiting him. He calls his parents to get rid of Jharna.

Reviewed Rating for this particular episode Shakti 30th July Jharna returns in Virat’s life: 4/5
This rating is solely based on the opinion of the writer. You may post your take on the show in the comment section below.