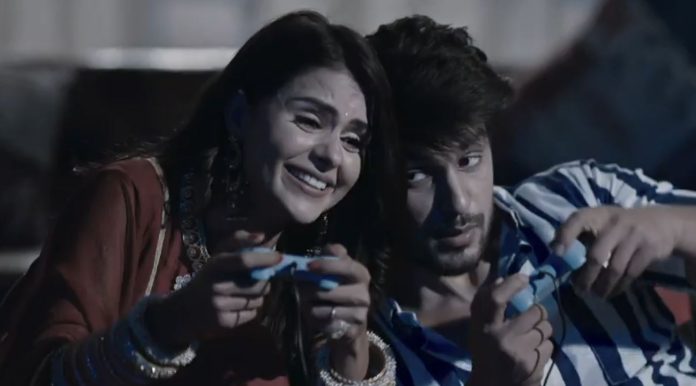 Udaariyaan 6th November 2021 Written Update Fateh breaks down Gurpreet expresses her concern to Khushbeer, when he angrily scolds her for fighting him for the sake of Jasmin. He tells that she got blind for Fateh’s love. She cries to show her worries for Fateh, who has lost his mind because of Jasmin’s fake love. She is afraid that Jasmin will ruin down Fateh one day. Khushbeer knows that Tejo was prosperous for Fateh, while Jasmin is destructive. He doesn’t want Fateh to marry Jasmin. Tejo feels depressed when she returns to her Sandhu house. She misses Fateh every moment.

Rupy understands that she is just suppressing her pain. He doesn’t want her to act so brave. He wants her to cry and relieve herself from the burden of the sorrow. Tejo finally lets the tears flow. She tells him that life seemed perfect to her when Fateh was with her. She feels foolish to believe that Fateh also loved her. She tells that Fateh was more like a friend for her, they had amazing understanding, but still she didn’t figure out what he wants. Rupy tells that such is the fate, unpredictable. He adds that they can’t know what’s written in the fate, they just have to accept the life as it comes.

Tejo tells that she is ready to learn the lessons taught by life. She expects Fateh to come and meet her. She gets worried on seeing Khushbeer, who shocks her by his wish. He tells her that he wants to see Tejo settled down, before Fateh and Jasmin’s marriage. He asks Tejo to promise her that she will get remarried. Tejo and her parents are shocked by his stubborn demand. Khushbeer keeps his condition just to stop Fateh and Jasmin’s marriage. Angad finds Fateh sinking in sorrow by getting too drunk. He fails to understand what Fateh wants in his life. He didn’t see anyone in such pain when the divorce had become a necessity to fulfill.

He explains the same to Fateh that he took the divorce by his own will. Fateh has no answers. He madly thinks of Tejo. He isn’t able to control his emotions. He returns home in the drunken state. Simran is worried to see Fateh. She asks him if he is missing Tejo. Fateh acts in front of her, but just talks about Tejo. Simran tries to get him to proper senses. Fateh breaks down when he realizes that Tejo left from his life forever. He sulks over the divorce. He cries a lot and confesses that he is missing Tejo.

Later, Fateh gets ready to rush to Sandhu house and just see Tejo once, if she is doing fine or not. He is much worried for her. He knows well that she must be crying as well. Fateh gets hesitant to enter the house. He reaches Tejo’s room and doesn’t enter. He is left stunned when he finds Angad cheering up Tejo and making her laugh. Fateh wants Tejo’s happiness, but doesn’t like to see her with Angad. Will jealousy make a way in his heart to help him realize his true love for Tejo? Keep reading.

Tejo refuses to Khushbeer’s wish. She tells that she just got divorced, she has a wound on her heart and soul, which can’t be healed so soon. She tells him that he shouldn’t expect her to agree this time, she can never move on when she isn’t able to get rid of the current wound. Khushbeer explains that Fateh is the one who gave her this wound, and she should forget him and move on. She refuses to get into any new relationship. She wants to give time to herself. She further adds that she isn’t so weak that she needs someone to complete her life. He tells that he is aware of her strength and bravery, but still he is falling weak on seeing her life sinking in sorrow.

She reminds him that she got divorced and its not even a day, she needs time to make herself understand. She requests Khushbeer to not force her to agree. She tells him that the entire family is with her to support her. He tells her that the elders won’t live forever to be with her, she will stay longer and may need someone. He requests her to get remarried. Tejo sternly refuses and weeps. She wants her family to understand her emotions. Rupy tells Khushbeer that they always expected Tejo to respect their wish, but this time they have to respect her wish and stand by her decision. He tells that they shall give time to Tejo. Khushbeer returns home and tells Gurpreet what he told Tejo.

She asks him why did he increase Tejo’s pain further. He tells her that he knows Fateh loves Jasmin, but he values Tejo more, Fateh has feelings for Tejo which he needs to understand. He tells that his plan is to get Tejo remarried just to show Fateh and make him realize his love. He knows that Fateh will not let Tejo marry anyone else and then accept her love. He wants to unite Fateh and Tejo. He tells that both are perfect for each other. He wants to save Fateh from evil Jasmin. They get a shocker to see their son coming home in a drunken state. Jasmin stays with Fateh, but doesn’t sober him up. Fateh comes up with a drama, and upsets his parents.

Fateh creates a huge drama at home. He tells that he was partying with Jasmin, since Tejo left from his life. He tells that Tejo is finally gone, she won’t get insulted if they celebrate their freedom now. He admits that he loves Jasmin and he is going to marry her. The entire family watches his drama. He angers Khushbeer by his nonsense talks. Khushbeer feels Jasmin will ruin Fateh, just Tejo can handle him. Gurpreet tells that Fateh doesn’t deserve Tejo at all. She hates her son for his bad act. Khushbeer and Gurpreet are much upset and get the signs of Fateh’s destruction if he stays with Jasmin. Jasmin doesn’t care for Fateh and his parents’ emotions. She asks Fateh to come to his room. Fateh sinks in sorrow and misses Tejo. Simran finds him crying and tries to pacify him. Fateh has actually acted in front of them to hide his sorrow. He cries for Tejo. Tejo also missed him and cries for him.

Tejo and Fateh miss each other a lot. He longs for her. Her memories keep flashing in his mind and make him weep. Simran knows he has feelings for Tejo. She wishes he understands his love for Tejo. He tries hard to hide his tears from Simran. He then confesses his feelings of shattering and defeat. He feels he lost something really dear. She tells that she pities him, he is making the same mistake in love which she did. He cries and hugs her. She worries for him. He admits that he is missing Tejo. He wants to see her once, to know if she is doing fine. He falls asleep on the floor. Simran feels sad for him.

Tejo reaches the academy to get Fateh’s signatures on some project documents. Jasmin gets into an argument with her. She asks Tejo to leave. She tells her that Fateh has gone to plan a surprise for her. She asks Tejo to go to Angad and get his signatures. Tejo doesn’t waste her time and goes to meet Angad. She finds him away, and wants to reach him some way. She tells Rajat that she has to get Angad’s signatures on the papers.

Rajat tells that she can just reach Angad if she takes the tractor. She asks for the keys, and surprises him that she knows driving a tractor. Tejo takes the tractor to cross the wet field area and reaches Angad. Angad likes the multi-talented Tejo. He is more impressed with Tejo. He encourages her to help herself since she isn’t lesser than any lioness. Tejo falls in Angad’s arms, and they both get into an eyelock. Tejo and Angad’s new story gets possible. Stay tuned.

Reviewed Rating for Udaariyaan 6th November 2021 Written Update Fateh breaks down: 4/5 This rating is solely based on the opinion of the writer. You may post your own take on the show in the comment section below.