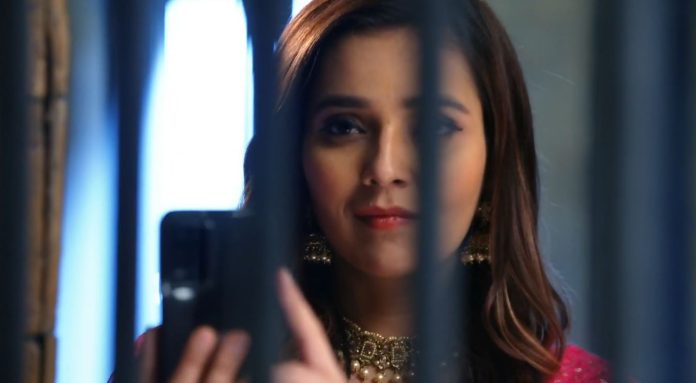 Kundali Bhagya 16th November 2021 Written Update Sona’s new ally Preeta cries in her room. She recalls how Pihu was shouting for help and fainted down. She feels guilty that anything could have happened to Pihu. Karan asks Preeta why is she crying. He wants her to not blame herself, it was just a small accident. He asks her to forget Bani and Kareena’s words. She tells that the elders can tell her anything, she is just worried for Pihu. He tells that Pihu is okay, nothing happened to her. He hugs her. She tells that she isn’t able to forget it. He tells that Pihu will always be a little kid for her. She hugs him and finds herself at peace. He asks her to let Pihu sleep, they shall go to their room.

Suddenly, Preeta gets dizzy. Karan grows worried for her. He holds her hand and finds the burn mark. He asks her why didn’t she tell him before about the burn. He cares for her. He lifts her in arms and takes her downstairs. He calls out Rishabh and the family to help him in the aid. Meanwhile, Sonakshi follows Sherlyn to the jail and finds the latter meeting Prithvi. She records their conversation.

Sherlyn and Prithvi wish each other for Diwali. She feeds him the sweets. They share a moment and then plot against the Luthras. Sonakshi gets happy to get a solid evidence against Sherlyn, through which she can team up with Sherlyn to rule out Preeta from the Luthra house. Karan praises Preeta’s efforts towards Pihu. He doesn’t want any of the elders to pester Preeta and call her a bad parent. Keep reading.

Prithvi tries to bribe the constable and get permission for making a phone call. He scolds the constable when the latter refuses. Prithvi tells that he will not get tired of giving money to him. He curses when the constable doesn’t entertain him. He tells that he is very powerful. He also wanted to celebrate Diwali and have sweets. Sherlyn meets Prithvi and feeds him the sweets to fulfill his wish. Prithvi gets emotional seeing her. She asks him to forget that he is powerful Prithvi, he is just a common man behind the bars. He wishes that he heard her before. They wish happy Diwali to each other.

She tells that she will meet the lawyer and get him bail out. He knows that she will not let him stay in the jail for long. She tells him about Pihu’s incident. He rejoices that Preeta is crying on Diwali. He wants Preeta to sink in sorrow and pain. He likes the news. Sherlyn asks him to take care. He is glad that at least Sherlyn is with him. Karan and Preeta meet Pihu. Preeta cries while making an apology to Pihu. She blames herself. Karan asks her to let Pihu sleep. Preeta faints in Karan’s arms. He finds her burnt hand. He takes her downstairs to get some help from the family. Sonakshi asks Karan what is the matter.

Sherlyn knows that Preeta’s condition is due to Sonakshi. She doesn’t want to alert the family about Sonakshi. Sonakshi drives Karan and Preeta to the hospital. Preeta gets conscious on the way and learns that they are going to the hospital. She asks Karan why are they going there, is Pihu admitted there. He tells that he is just taking her. He asks Sonakshi not to slow down the car. Preeta tells that she wants to go home. Sonakshi tells that they will go home if Preeta wants.

Karan asks Preeta not to be stubborn. He kisses her with love. Sonakshi angrily applies the brakes. Karan asks her to drive carefully. Sonakshi apologizes for getting distracted. Karan asks her not to take tension for Preeta and just drive safely. Karan takes Preeta to the hospital. Preeta tells that she is totally fine. Karan tells that Preeta had fainted down. Preeta tells the doctor that she was exhausted and that’s the reason she fainted down. She tells about Pihu’s accident. Karan tells that he doesn’t trust Preeta when its about her health. He wants to get Preeta’s tests done.

Doctor tells that maybe she is the lucky doctor to give them a good news. Karan tells that they aren’t planning any baby. Doctor tells that the symptoms are of pregnancy. He asks her to go ahead. Meanwhile, Rishabh wakes up at night. He finds Sherlyn missing. Sherlyn comes to her room. She answers some call. She behaves suspicious. Rishabh questions her about the late night call. She lies that it was her mom’s call. He has seen the lawyer’s name on the screen. He finds her lying again. He still wants to believe her. Sonakshi comes back home with Preeta and Karan.

Preeta smiles thinking positive that she may receive a good news this time. Karan asks the reason for her smile. Sonakshi tells that she will get milk for Preeta. Preeta refuses to have it. Sonakshi asks Karan to handle his wife. Karan asks Preeta what was she thinking. She tells that she loves him more when he cares for her. He just wants her to stay happy. Sonakshi adds some pill in the milk to harm Preeta and discard her pregnancy in case if its there. Karan hugs Preeta. They have a romantic moment.

Sonakshi gets the milk for Preeta. Preeta refuses to have it. Karan emotionally blackmails her and asks her to have it. Preeta still refuses for it. Sonakshi asks Preeta to be energetic and strong always, so that she can take care of Pihu and family. Karan asks her to leave them alone. Preeta takes Sonakshi’s advice and drinks the milk. Sonakshi gets glad that Preeta had consumed the drugged milk. Karan realizes that Preeta cares a lot for the family and proved it once again. Preeta is hopeful to receive a good news. Keep reading.

Reviewed Rating for Kundali Bhagya 16th November 2021 Written Update Sona’s new ally: 2/5 This rating is solely based on the opinion of the writer. You may post your own take on the show in the comment section below.