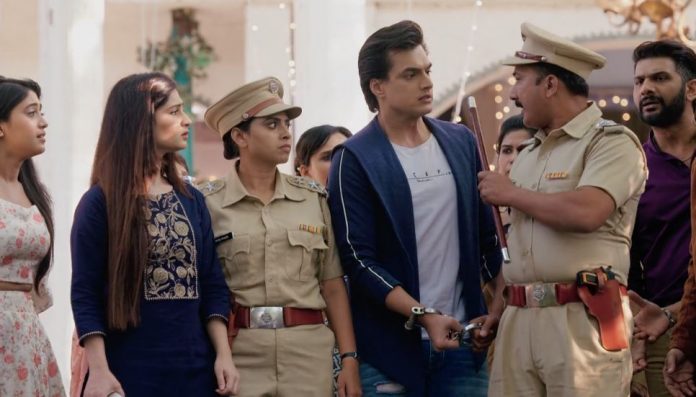 Yeh Rishta Jailed Kartik Goenkas face the unthinkable Naira is much worried for Kartik. She wants to find him and accompany him to meet Vedika. She learns that he has already left from the house. She thinks she should also go to the same hotel and support him in explaining Vedika about their current scenario. She calls Kartik. She realizes that he forgot his phone. The Goenkas celebrate Diwali. They are happy to see the kids enjoying. They find Akhilesh upset. They want to support him and give him some time so that Akhilesh gets normal too. Kairav misses Kartik and Naira. Suwarna tells that they have gone out and will come soon to him. Kairav awaits them.

Suwarna thinks where did Kartik and Naira go so early in the morning. Dadi is also stressed. Kartik reaches the hotel. He wants to know the matter. Vedika gets glad to see him. She wants to tell him about her dangerous Ex, to get Kartik’s help in dealing with it. Vedika is sure that he will understand her. He visits her room, while her Ex drags her to his room. Vedika wants to get free from him. Her Ex is mad in love with her. He tells her that she left him suddenly and ruined his life. He doesn’t want to leave her alone.

Kartik thinks maybe Vedika is awaiting him in the lobby. He finds it weird that she isn’t anywhere. Vedika tries much to alert Kartik and get his help. Kartik fails to reach her despite getting some odd clues. Her ex wants to take her away from him always. Vedika feels helpless. Kartik worries for her. Naira meets him and learns that Vedika isn’t present at the hotel. Vedika’s Ex wants her back in his life. He is obsessed with her. Naira tells him that they will find Vedika and explain her about Kairav together.

They try to ask the receptionist about Vedika. Vedika’s Ex kidnaps her and takes her away in no time. Kartik misses to notice it. Kartik wants to ask Vedika’s aunt and also her friend Pallavi. Kartik and Naira return home to tell about Vedika’s return to Udaipur. Pallavi had seen Kartik at the hotel and also got a call from Vedika, while Vedika was struggling for her freedom. Pallavi gets mistaken that Kartik has kidnapped Vedika. She gets police at Goenka house. She plays the call recording. She tells the inspector that Kartik is still in love with his ex-wife and planned Vedika’s kidnapping.

She accuses Kartik and Naira for making Vedika out of their way. She reprimands Kartik for never valuing Vedika and just being after Naira. Goenkas and Naira try to support Kartik and save him from the police. Goenkas fail to convince the police that Kartik isn’t wrong. Pallavi tells them that Vedika is in city and still Kartik didn’t take her home. She counts his mistakes. Naira puts efforts to defend Kartik. Pallavi doesn’t think Kartik will ever love Vedika. She doubts that Kartik has done this kidnapping because of Naira.

She holds Naira responsible. She tells the police that Goenkas too are careless and don’t value Vedika. She feels Vedika landed in a wrong family. Dadi, Suwarna and Manish battle Pallavi’s blames. They tell Pallavi that Vedika didn’t inform them and left the house without their permission. Pallavi feels Kartik just wants Naira in his life. She watches Kartik and Naira’s bonding. She gets much angry on Kartik for being a disloyal husband. Naira wants to find Vedika. Pallavi gets Kartik arrested. Naira cries for the new trouble. Inspector asks Goenkas to get their lawyer at the police station.