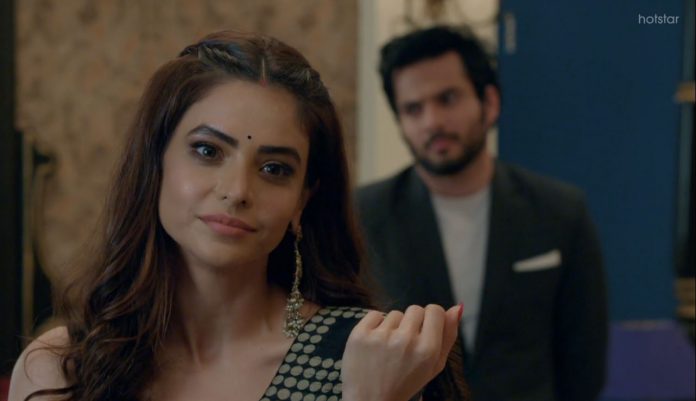 Kasautii Ronit entry Anurag challenges Prerna again Komolika confronts Anurag about his meeting with Prerna. She doesn’t tell him that Prerna confessed love for him. She thinks once he knows this, he will run after Prerna, being madly in love with her. She asks him about the Basu city project. Anurag doesn’t want to answer her anything. He feels tired and avoids the talks.

Komolika gets mistaken that he really cares for her. She thinks he would plan a surprise for her, in the form of a good news that their have got the land transfer permissions. Meanwhile, Moloy and Mohini’s argument irks Komolika. She wants everyone to be under her control. Moloy tells Mohini that he can’t become Komolika’s devotee like her. Nivedita also feels that her life is ruined after Komolika took control on the house and business. She wishes to get away from the family.

Mohini taunts her about choosing middle-class Anupam. On the other side, Anurag meets Sudeep and tells him that he wants Prerna to get the land permissions. Sudeep asks him why is he ruining himself like this. Anurag just wants Prerna to win. He feels happy to see her happy. Sudeep realizes his love for Prerna. Later, Prerna misses Sneha on sighting some balloons. She feels at peace when she meets Sneha. She tells Sneha that she has come all the way just to meet her.

She finds Sneha upset and learns that she is actually hungry. She pays for the food. Sneha runs to buy her favorite candy. She comes in front of a car, which could have knocked her down. Anurag comes to her rescue. He also feels an emotional connect with Sneha. He asks her to stay well and safe. Sneha likes Prerna and Anurag for their caring behavior towards her. She doesn’t know who are her parents and wants the NGO lady to share the truth some day. Anurag happens to see Prerna there.

He thinks its a chance to irritate her so that she distances herself. Prerna shows her enthusiasm in ruining his business. She tells him that she has got the land permissions and will very soon ruin the Basu city plans. Anurag also wants it to happen. She tells him that she will not go back until she ruins him, since its her turn to give back the pain to him. She tells that she will put him in such a painful state that he will find no cure. Anurag takes her hatred. He apologizes to her. When she believes him instantly, he breaks her hopes. He calls her a weak person to always believe him and get emotional. He tells her that she can’t win if she gets weak this like.

He reminds her that he had pushed her down the bridge and has zero regret. He tells that he doesn’t regret to trouble her even now. Prerna gets angered on hearing him. Also, Komolika and Ronit make the big plans for the company. She feels Anurag will surely get the land permissions to surprise her. Ronit heads the company as the CEO. He doesn’t think Anurag will meet her expectations. She tells him that everything is in her control. Ronit knows her well. She asks him to limit their conversation to themselves. Anurag challenges Prerna once again to bring out the best in her. Anurag and Prerna meet Sneha again and learn that she is an orphan.

Reviewed Rating for this particular episode Kasautii Ronit entry Anurag challenges Prerna again: 4/5
This rating is solely based on the opinion of the writer. You may post your take on the show in the comment section below.