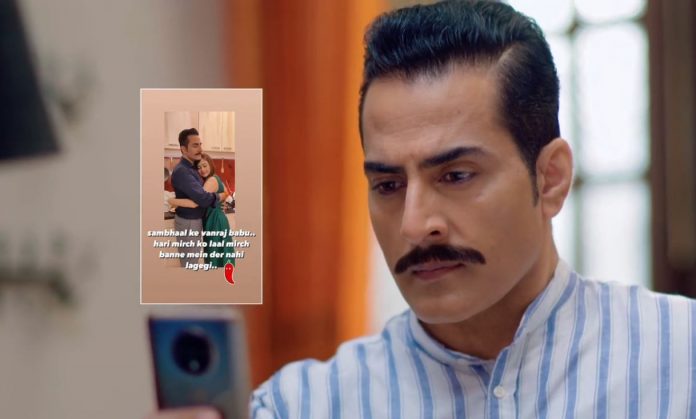 Anupama 22nd September Written Update Vanraj feels tortured Anirudh can’t see Vanraj and Kavya happily staying under the same roof. He wonders how are they able to cheat Anupama. He threatens them that he will send their picture to Anupama and expose their affair. Kavya is stressed, but knows that Anirudh will not take such a step.

Vanraj gets worried when Anirudh sends him the pictures and scares him further. Vanraj doesn’t want his family image to get tarnished. He avoids Anirudh’s messages. Anirudh ruins his peace. He makes sure that Vanraj doesn’t get a moment of joy and peace even if he is with Kavya. Anupama meets Vanraj and plans to have a dance rehearsal with him. When she gets close to hug him, he shows his fury. He makes her away by feeling disgusted by her stinking hands.

He tells her that he hates the smell of the spices that she always carries with her. He doesn’t want her to romance all the time, since they are not young now. Anupama feels hurt on hearing his criticism. She rushes to wash off her hands. She uses some perfume to smell pleasant. She tries hard not to upset him again. Anupama’s tears gets seen by Sanjay, who realizes that Vanraj has hurt her sentiments.

He goes to threaten Vanraj that he will expose his affair to the family if he finds Anupama crying again. He exclaims that he can never see Anupama unhappy, he was hiding the truth just for her sake, but if Vanraj is failing to give her happiness, then its no use to keep the truth concealed. He wants Vanraj to rectify his mistake. He thinks Vanraj did much wrong by getting Kavya home. Vanraj wants to tell him that Kavya came uninvited.

Vanraj thinks not to anger Sanjay, else the latter can really reveal his secret. He goes to apologize to Anupama and make up for his misbehavior. He plays the same lovey dovey drama again. He sings Anupama’s praise and tells her that he loves her a lot. He apologizes for venting his anger on her, since he is much stressed due to work issues. Anupama falls in his words and forgets her sorrow once he hugs her with love. Vanraj fools her again.

Kavya happens to see their hug and grows jealous. She wants to confront Vanraj. She disturbs their moment and expresses her insecurity to Vanraj. Kavya isn’t happy seeing his bond with Anupama, even when she knows that he is faking it all. A special guest arrives home. Baa’s relative Kamini comes and gets special welcome. Anupama misses her family. Baa safeguards the costly diamond ring. Anupama doesn’t think the ring can get stolen, since its just family around.

Kamini’s introduction scene goes for long in a hilarious way. She learns about the diamond ring and sets her eyes on it. She seems to be interested in the ring, after knowing its price. Later, Vanraj shares a moment with Anupama and praises her looks in the gifted saree. Kavya gets upset to watch them together. She plans to snatch the saree from Anupama. Moreover, Vanraj calls up Pramod to invite him for the ceremony.

Rakhi takes the call and speaks to Vanraj in a demeaning tone, which makes him furious. Vanraj controls his anger and invites her for the ceremony. He keeps his cool, knowing Rakhi is finding chances to break the alliance. He answers Rakhi’s taunts. Rakhi looks forward to meet Shah family, hoping to find a new way to break the alliance. Anupama and Vanraj share a laughter discussing his annoyance when anyone calls him Sasur, which makes him feel old. Kavya breaks into their happiness by starting to snatch Anupama’s rights.

Reviewed Rating for this particular episode Anupama 22nd September Written Update Vanraj feels tortured: 3/5
This rating is solely based on the opinion of the writer. You may post your take on the show in the comment section below.